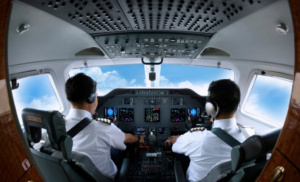 well…..,I would divide the answer to this into two parts that speak to the different components of learning to fly.

But first, a short story.

Some years ago I took a friend in my airplane on a sightseeing tour of the great rift valley area. He’d never flown in a General Aviation aircraft before so he was excited and a bit nervous. After about 40 minutes we were circling over lake Naivasha and I asked him if he wanted to fly. After a little hesitation, he agreed. He then took the controls and with occasional comments from me he flew for about 30 minutes back to Jomo kenyata International Airport. I only took over the controls again when we were about 300 feet high on final approach to land.

So as you can probably infer, flying an aircraft for the most part is fairly easy. Not always and not in all conditions, but most people can easily learn the basic aircraft controls.

However, there’s “flying” and there is being a “pilot.”

That pilot thing involves understanding aerodynamics, precision, learned skills, and so on and so forth.

Becoming a pilot takes hours of study, continued learning even after earning the different pilot’s licenses, lots of practice, both written and oral exams, and so forth.

In the whole scheme of things, flying is the easy part. however, for you to become a great airline pilot, you must also consider training with a highly credible flying school.  And for this case, I would advise you train with skymax flying school in Nairobi Kenya. They have a great fleet of aircrafts, a full roster of caring Flight Instructors, and most importantly their great track record of ”SAFETY ”

What does a Flight dispatcher do in an Airline?